Historic volcanic eruptions [1600 AD to 2021 AD] have been consistently dated to be millions or even billions of years old. If radiometric dating were accurate, it should give low or zero ages. Some volcanic glass only two months old (1/6 of a year) was dated to be 4,997 million years old. The dates were 30 billion times in error.

Paul Nethercott has an associate diploma of computer programming from Mount Gravatt Technical College. He spent four years [2010-2014] researching radiometric dating at James Cook University in Townsville, Queensland and seven more years [2014-2021] at the University of the Sunshine Coast. He has authored multiple articles on radiometric dating and the Bible. He has also written many articles about the Bible and astrophysics. He has written numerous articles about Bible doctrines and apologetics. He has been a creationist and Bible believer since 1984. He is single and lives in the Sunshine Coast, Queensland.

The Age of the Earth, G. BRENT DALRYMPLE https://www.sup.org/books/title/?id=2550

Radiometric Dating Errors: A rebuttal of Brent Dalrymple's book "The Age of the Earth." 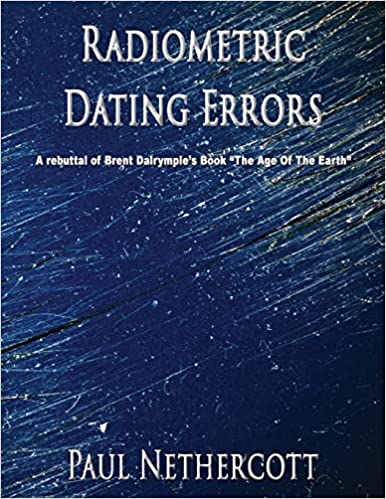